Saying goodbye to a relationship 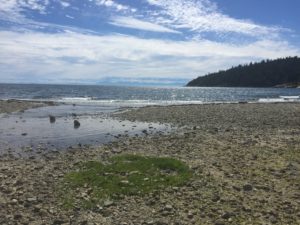 We were raised in the Age of Divorce, meaning we were told from a very young age that 50% of marriages would end in divorce. I knew kids growing up whose parents were divorced but I don’t remember every talking about it openly. It was considered private, not for public consumption. I don’t know if that was the reason I wasn’t sure if marriage was for me, but I waited until I was in my mid 30s to get married, and even then I had to reshape my own hopes and expectations around it. Over the years, I’ve had several friends separate or get divorced, and it’s typically been a private affair. They’ve worked on their relationship behind closed doors, often involving a counsellor, and sometimes involving a few trusted friends to help hold the emotional turmoil of it all. Never did the divorce process involve their community. I never thought much of it until I realized that a relationship is more than just two people.

When we get married, we invite family and friends together to witness vows, participate in the ceremony, and celebrate the beginning of a marriage. So why is divorce so closed off? Is it because there’s an overarching sadness that surrounds it, often accompanied by feelings of guilt, shame, and regret? Don’t those emotions need the support of a community even more than feelings of love, happiness, and excitement?

It was with that in mind that I offered to convene a divorce ceremony for a dear friend. Her relationship was close to my heart in the sense that we felt connected to both people and our lives had been intertwined for years. When the news of a separation was shared, my heart broke for them, and also for us. I hated the idea of choosing one friend over another, and I felt sad knowing that our community would undoubtably shift because of this news. I wanted to help my friend heal, and I wanted to support the healing of our friend circle in the process.

I started to research ‘Divorce ceremonies’ and quickly discovered there’s a whole world out there dedicated to this idea. Some couples choose to have a divorce ceremony together, sharing stories and messages of love, sadness, regret and hope. Some people want to do it solo, giving them a chance to process their side of the relationship in order to close one chapter and move into the next. Some people want to make it a big event, others want it to hold a quiet energy. As I’ve discovered through my ceremony exploration, to each their own.

The divorce ceremony I organized invited all types of emotions to surface. My friend wanted to do it solo, with a circle of girlfriends holding space for her past, present, and future. We gathered on the beach, surrounded by water and under a hot, summer sun. One friend sang a song, One Voice by The Wailin’ Jenny’s, inviting us to add our voices together in solidarity. We sat quietly as our friend wrote down the things she wanted to let go of, the things she wanted to release, and then she burned those and dropped them into a bucket of water. We then wrote messages of hope and inspiration on rocks for her to keep. We helped her thank the relationship for all that it brought, and it brought so much joy and love to the world, and we helped her say goodbye to it. We helped her anticipate all the wonderful things to come, and we held her in the warmth and love of friendship.

The entire experience reminded me of Esther Perel’s idea that a marriage isn’t just between two people. Just as a marriage belongs to everyone who is holding it up, a divorce can impact so many people on different levels. A divorce ceremony gives people the opportunity to thank and release their own connection to the relationship, and hopefully create a circle of support for those directly affected.